Amelia Guaynabo Baseball Little League lost a hard-fought 2-0 game against Vega Baja earlier in the region tournament but was able to flip the script on championship Sunday, finishing with a 5-1 record to earn the title and punch their ticket to represent Puerto Rico at the 75th Anniversary of the Little League Baseball World Series.

While the first ever trip for Amelia Guaynabo Baseball Little League, this marks the 11th LLBWS appearance for Puerto Rico, dating back to the country’s first LLBWS in 1959. The most recent team from Puerto Rico to play in Williamsport was the 2018 Caribbean Region champion Radames Lopez Little League (Guayama, Puerto Rico). The Puerto Rican team dropped their first game of the tournament before stringing together three straight wins and was eventually knocked out by Japan in the international semifinals. Puerto Rico’s best tournament run came in the 1999 LLBWS, where the Juan A. Bibiloni Little League (Yabucoa, Puerto Rico) went 3-1, with its only loss to Japan in the international championship game.

The 2019 decision to expand the LLBWS allows two more international teams to earn direct entry on a three-year rotation dependent on league and player participation. The randomly selected rotation grants Puerto Rico direct entry in 2022 alongside Panama and in 2024 with Cuba. In 2023, teams from Puerto Rico will compete for a spot in Williamsport through the Caribbean Region tournament.

With first-round matchups for the 2022 LLBWS set, Guaynabo Baseball Little League will square off against the winner of the Mexico Region in Game 7 on Thursday, August 18, at 5 p.m. in Volunteer Stadium.

Little League International will be celebrating the 75th Anniversary of the LLBWS this year and will celebrate the history of the iconic event throughout the summer leading up to this year’s World Series in August. More information about the 2022 Little League World Series tournaments, including full schedules and downloadable brackets, can be found at LittleLeague.org/WorldSeries. 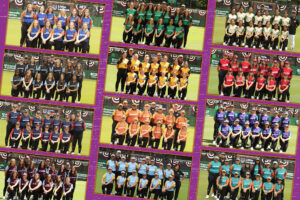 Inside the Rise of the Little League Softball® World Series

And Then There Were Two …